Into my second week updating and researching the Manchester Museum’s tropical cicada and lantern fly collections.  Literature on this particular group of insects has been difficult to find, especially with regards to the Fulgoridae. I managed to find some books on old world cicadas with Phil and Dmitri’s help. One of the books is quite old. It’s called A Monograph of Oriental Cicadidae by William Lucas Distant. You can find paperback reprints of this book on amazon, but we appear to have a first edition with original colour plates. Distant discovered and named many new species while he worked at the Natural History Museum in London from 1880-1900. His fascination with natural history started when his father, a whaling captain took his son to the Malay Peninsula. Distant published many books on Homoptera- including the  Biologia centrali-americana, one of the few works on Lantern flies in the Americas, which can be found online and is well worth a look.

Illustration from A Monograph of Oriental Cicadidae

Finding this book was excellent for me, as many of the fulgorids and cicadas in our collection are undetermined, especially those from Central and South America. The colour plates may give us some clues as to the taxa of the mystery specimens.

Fulgoridae do seem to be very mysterious and strange. One of the main questions people ask about them is why they look the way they do. I gave a presentation yesterday and my first powerpoint slide showed a photo of Laternaria species. Our project manager exclaimed “that butterfly looks upside-down!”

As I mentioned in my last post, Fulgorids are not butterflies or even flies, but Homoptera, or “true-bugs.” The fact that they appear upside-down may be, for want of a better word, “deliberate.”

To a predator, a fulgorid with a long snout-like feature will appear to be back-to-front. The “snout” will appear to be the tail and the abdomen the head. Some fulgorids even have short hair-like structures on their abdomens that resembled antennae or feelers. Some species have false eye spots on their wings, which they flash to further confuse predators.Many specimens in collections often have had the backs of their wings bitten off, which seems to add further weight to the theory.

In addition, fulgorids secrete wax, which further enhances their bizzare appearance. The wax forms waterfall-like structures which may also confuse or deter predators. 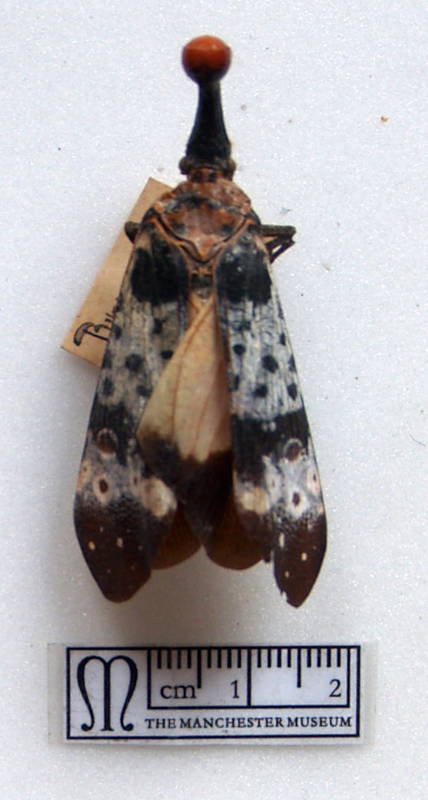 The Peanut-Head bug, or Alligator Bug takes mimicry one step further. Not only does it have false eye spots, but its head may be one of the most bizzare visual adaptations to feature in the insect-world. Viewed from the side, the head resembles an alligator in miniature, complete with teeth and protruding eyes.  The actual mimicry may be that of alizard.

The name “lantern fly” makes this group of animals seem even stranger. This was born out of the misconception that the insect’s strange protuberances lit up at night. The myth came from Maria Sybilla Merian, a naturalist and illustrator. In most books I have read about Merian, not much information is given about how this misconception came about. Most authors write that she simply assumed the insect’s heads lit up. I found it puzzling that someone would make up such a story.

Then I read the section on lantern flies in Walter Linsenmajer’s Insects of the World. In it, he describes how when Merian opened a box of lantern flies, some were alive and some were dead. In the tropics, phosphorescent bacteria quickly multiplies in dead insects. It may well be that Merian was telling the truth- even if the light did not come from the insects themselves. I just find it somewhat sad that most authors write Merian off as making the story up. After all, there are sure to be more misconceptions and mysteries about these insects as people study them. Little is known about the Fulgorids as is.

I have just finished a year long traineeship as a Biology Curator at Manchester Museum. I am currently a research and curation volunteer in the Entomology and Botany departments. -Gina Allnatt
View all posts by Gina Allnatt →
This entry was posted in Entomology, History and tagged cicadas, collectors, fulgoridae, history, lantern flies. Bookmark the permalink.

1 Response to Mysteries and Misconceptions